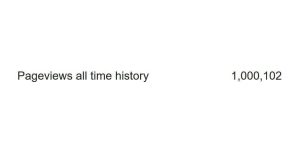 Sometime this morning this website, which started as a personal blog where I shared some of my experiences and blossomed into a community of people interested in personal development, passed a million views. I had already reached that milestone many times over on several of my social media profiles, but this was on the core website.

A million views is a number that is hard to comprehend for most people, we toss out a million like it's no big deal. It's a milestone that seems small today when giants like The Huffington Post receive several times that many visits in a month.

The reality is that if you met one new person every hour, twenty-four hours a day, seven days a week, it would take you 114 YEARS to reach that many people. For a guy who never originally planned to do much more than share some lessons he had learned over the years from running businesses and raising kids and doesn't have a staff of thousands like those big guys, it's pretty neat to see.

So what happens when you pass a million views on your blog? Not much. There weren't any trumpets blaring, no celebration, no party. It's like how millionaires explain passing a million dollar net worth. One day they look at their finances and go; “Oh, I'm a millionaire now. That's cool. What's for lunch?”

I'm past a million readers now. That's cool. Thanks guys :). What's for lunch?

How Your Business Can Adapt and Succeed Through COVID-19

Don’t be too hard on yourself. Successful people go through hard times too.

Don Smith is a business coach with decades of experience. Happily married with five children, he lives in Springfield, Illinois. To work with Don, please click here.