Learn More>>
Disclosure: Posts may contain sponsored information or affiliate links, meaning we may get a commission if you decide to make a purchase through our links, at no cost to you. Please read our privacy policy for more info.
0

Getting something you created up-voted to the front page of Reddit sounds fantastic, but what really happens when you go viral on Reddit?

Here are three lessons I took away from my experience after a meme I created skyrocketed to the front page of Reddit.

It is a wonderful feeling to see something you created go viral on reddit and get 18,000+ upvotes and 100,000+ views within 24 hours. But lots of upvotes, likes, and views don't translate directly into cash.

Raising awareness of your brand is helpful, but you still have to get people to purchase your products or services to make money. One viral meme isn't going to do that, especially if you don't have anything to sell.

On the other hand…

Don't get me wrong, anything that raises awareness about your business can lead to new customers. I've had quite a number of people ask me to coach them on how to make their business go viral after reading this article, seeing that I've got thousands of shares on my little life-goals workbook, or seeing some of my other content like how I took the first spot on Google for several queries.

But if I hadn't created things to sell, that viral meme would have generated zero revenue.

My phone blew up when my slightly modified quote, “The most dangerous phrase is ‘We've always done it this way',” from Rear Admiral Grace Murray Hopper went viral on Reddit. Until I turned off notifications for the post, my phone was buzzing every few seconds from comments as it screamed past 10k upvotes, then 12k, then 15k, finally settling around 18k upvotes.

A few days later? The rest of the world forgot about my meme's 24 hours of fame and life went back to or at least as normal as it gets when you run a site like this with tens of thousands of followers while running another business and chasing five kids.

3. The Secret to Going Viral Is in the Details

If you do a little digging, you'll find out that the original quote from Hopper was actually “The most damaging phrase in the language is “We’ve always done it this way!” according to quote investigator. Someone else had already tweaked the quote to say dangerous instead of damaging. I tweaked it a little more and added her picture. It was something familiar to most of the audience, yet a little unique.

The meme also had a lot of hidden depth behind it for people who knew Hopper's story, which is why it stood out to people.

Some people even snickered a little with her title of rear admiral and the idea of doing things differently…yeah, that wasn't intentional.

My thought when creating it was that most people would not consciously notice those very subtle tweaks unless they were pointed out, but subconsciously they would be drawn in, and I think that's precisely what happened. In my experience, success is always in the details, pay attention to them!

I encourage you to take notice of what works and what doesn't and make those tiny little tweaks in your own life if you want to stand out. If you want things to change in your life, try something different this year! 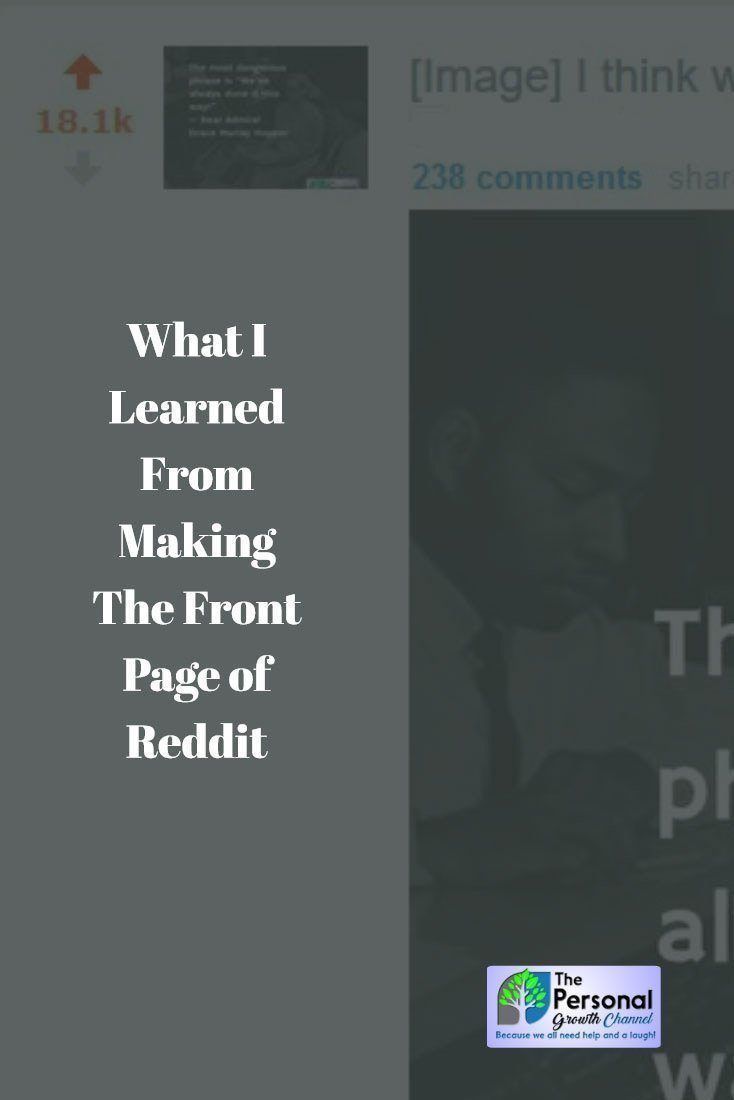 Get book recommendations, community news, and inspirational articles in your inbox.

3 Lessons I Learned by Going Viral on Reddit
How to Deal with Failures in Your life?
How to Create an LLC: Starting a Business
Take The Book A Month Challenge
Life Coach Certification Review: Becoming a Certified Life Coach
How to Get Ranked High in Google’s Search Results
I’ve lost my passion for life. How do I renew it? 3 Questions you must ask yourself today to revive your passion!
7 life lessons I’ve learned over the last 39 years
Do You Give Yourself the Gifts of Stillness and Silence?
What Do You Do When Your Day Becomes Complicated?
Recovering From Situational Depression: What Helped Me
Best Social Media Practices For An Entrepreneur In 2020
10 Reasons to Hire a Personal Trainer
Before you give up, start.