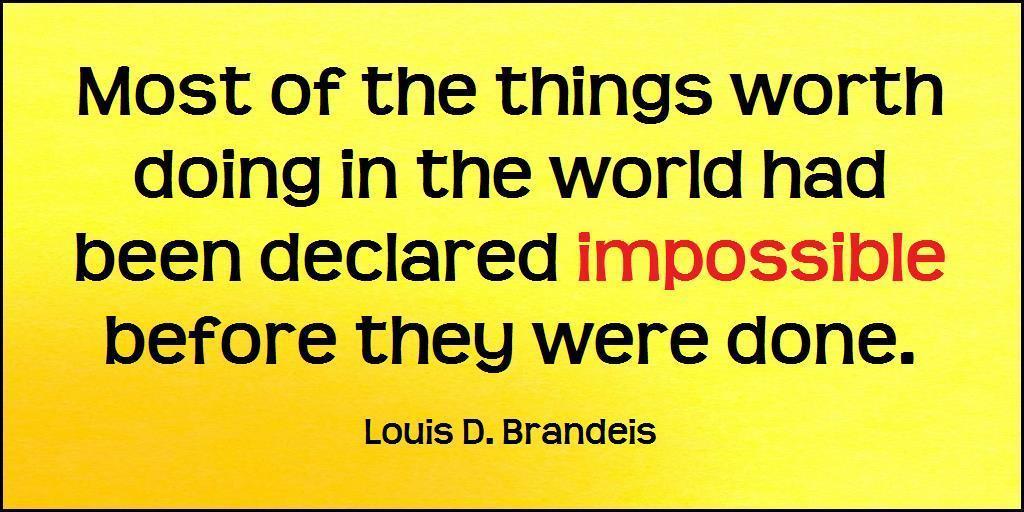 There was a time when I was surrounded by people I now refer to as proponents of impossibility. If a creative idea came up, they advised me to not even try. How I wound up in the midst of such downers is a question for a different post. For the moment, I’ll simply warn you to stay alert. Disparagers abound, and they come in many subtle shades of despondency.

People are making the impossible happen every day. A fledging business suddenly gains traction and lifts off. The sick recover their health against all odds and dire prognoses. A completely isolated deaf-blind woman named Helen Keller becomes a prolific author and influential thinker. In countless cases where they said it couldn’t be done, someone had the courage, confidence, and grit to turn an idea into reality.

In terms of accomplishing the so-called impossible, some of the most sensible advice I ever received
was to break down challenging objectives into smaller, manageable pieces. I’m amused when good, practical advice for life in the 21st century stems from historical times. Take a remark by Francis of Assisi, a Catholic priest in the Middle Ages.

“Start by doing what’s necessary; then do what’s possible, and suddenly you are doing the impossible.”

For the record, here’s a snapshot of Italy around 1200 AD. There were no smartphones—no phones at all, for that matter; copying a document entailed countless hours of painstaking labor, and mass communications would most likely have meant a sermon in a crowded cathedral.

Still, the saint put his finger on something that remains relevant in our times. You can’t achieve any goal, let alone a difficult one, without first overcoming inertia and getting the ball rolling, so to speak. Since that’s always been the hardest part, the monk advises us to start slowly.

Pressuring yourself to achieve an objective too quickly can lead to frustration and a sense of being overwhelmed. You lose focus, spin your wheels, and waste energy that could be put to more productive use. Of course, once we’ve made a start, we realize that no path is without its obstacles. Determination drives us to find ways of overcoming them.

Picture yourself watching a movie. You sit spellbound as the lead figure faces “impossible” obstacles against (almost) impossible odds. It seems human to root for the underdog.

The same holds equally true in real life. History remembers those who encountered the toughest obstacles. Indeed, perhaps determination and perseverance are two of history’s most important lessons—if we’re receptive to its teachings.

While obstacles can intimidate you, test your will, and challenge your resolve, they can also shift your perspective. What comes to mind is, say, a very successful person reviewing their career. They look back and say: If it hadn’t been for such-and-such (i.e., some whopping obstruction), I wouldn’t be where I am today. It may sound paradoxical, but what if we actually welcomed obstacles when they arise?

They say that a bend in the road is not the end of the road unless you miss the turn. I doubt whether anyone who achieves a lofty goal ever does so without having to follow detours and redoubling their efforts along the way. Consider Steve Jobs. At one point, he was fired from his own company, but that didn’t stop him from ultimately achieving iconic status. Some of the greatest minds and highest achievers have taken a dim view of the notion of impossibility. The man who once raised a boxing glove and proclaimed himself “the greatest,” scoffed at the idea:

“Impossible is just a big word thrown around by small men who find it easier to live in the world they've been given than to explore the power they have to change it.” ~Muhammad Ali

Those are fighting words.

P.S.: Almost forgot. St. Francis didn’t always achieve the impossible. For example, his effort to covert the Muslim Sultan of Egypt to Christianity ended in failure. Afterward, though, his resolution and organizational skills led him to found religious orders that continue to influence the Western World fully eight centuries later . . . which sounds almost impossible, doesn’t it?

This is a guest post by Philip Schmitz. Born in the US, Philip spent his formative decades in Salzburg, Austria. He works as a professional translator and editor in Connecticut. Twelve of his translations have been published as hardcover books.  In 2015, he launched a personal blog and has since produced several collections of illustrated, inspirational quotes.
Share